Well known for the power, clarity, and depth of intellectual and emotional understanding of his interpretations, particularly of Mahler’s works, Jonathan Nott was invited in 2014 to conduct the musicians of the Orchestre de la Suisse Romande in a performance of Mahler’s Seventh Symphony. The result of this very fruitful first meeting was his immediate appointment in January 2017 as Music and Artistic Director: a collaboration which has recently been renewed for an indefinite period beginning in September 2021.

This new perspective takes the acknowledged Genevan roots of the orchestra as international ambassadors – more recently Spain (2017 & 2022), South America (2018) and Asia (2019) – and adds a new, combined mandate to bring classical music to all inhabitants of the region.

He studied musical analysis and composition at the University of Cambridge as a choral scholar at St. John’s College; singing and flute at the Royal Northern College of Music in Manchester; conducting at the National Opera Studio in London. His conducting career began at the opera houses in Frankfurt and Wiesbaden, developing a repertoire spanning the whole gamut of theatrical styles: all the major works of the operatic repertoire (including Wagner’s complete Ring cycle), Sondheim, contemporary opera and ballet.

His passion for contemporary music spawned a close relationship with Ensemble Modern, and forged long-standing artistic and personal collaborations with composers of the ‘60s avant-garde, György Ligeti, Luciano Berio, Pierre Boulez, Helmut Lachenmann, Karlheinz Stockhausen as well as most of the composers of his own generation.

The year 1997 marked the beginning of a special relationship with Switzerland: in the five years as principal conductor of the Lucerne Symphony Orchestra he took an active part in the inaugural period of the new KKL, and 2007 saw the start of a major collaboration with the Lucerne Festival: conducting Boulez Répons with the Ensemble Intercontemporain, of which he was the Music Director from 2000 to 2003, « artiste étoile » in 2007, concert performances of  Wagner’s Ring cycle in 2013, Verdi’s Falstaff in 2015 –  the latter two both with the Bamberg Symphony, as well as one concert with the Orchestre de la Suisse Romande in 2018.

2022 will see a first collaboration with the Orchester der Lucerne Festival Alumni.

Fundamental in the sixteen years and over 670 concerts as Principal Conductor of the Bamberg Symphony Orchestra from 2000 until 2016, was the goal of taking tradition and infusing it with as wide a range of music-making as possible. He created artist-in-residence programmes, led the orchestra each year on major international tours, fulfilled in 2005 a week-long residency at the Edinburgh Festival with five concerts in one week including Wagner’s Tristan und Isolde, presented Boulez Pli selon Pli at the Berlin Musik Festwochen, received a Midem Award in 2010 for his recording of Mahler’s Ninth Symphony, created a production of Haydn’s “L’isola disabitata”  with the internationally-renowned German designer Peter Schmidt, and launched the Gustav Mahler Conducting Competition conceived specifically to give personal support to the next generation of world-famous young conductors and conductresses. He makes his return to Bamberg in Autumn 2021.

Sharing knowledge and bringing inspiration to young artists has been a fundamental premise of his career. Jonathan Nott has fostered a long-term commitment to the Junge Deutsche Philharmonie, where he has been Principal Conductor since 2014, and is also a regular guest conductor at the Gustav Mahler and Bavarian Youth Orchestras.

Jonathan Nott’s large catalogue of highly-acclaimed recordings includes Ligeti’s complete orchestra works with the Berlin Philharmonic, the entire Schubert and Mahler Symphonies with the Bamberg Symphony Orchestra as part of his long-term SACD recording contract with the Swiss label TUDOR and Mahler’s Das Lied von der Erde with the Vienna Philharmonic Orchestra and Jonas Kaufmann as soloist for SONY. His extensive catalogue of live recordings with the Tokyo Symphony Orchestra for the Japanese label OCTAVIA includes Bruckner, Strauss and Beethoven.

Always an avid exponent of hi-tech recording, 2018 saw his first «multi-channel 9.1 Auro 3D» collaboration with PENTATONE and the OSR, mirroring the French, German and contemporary music history of the orchestra with works by Claude Debussy, Richard Strauss and György Ligeti.

A second recording comprising a symphonic programme around the theme of "Pelléas et Mélisande" with works by Schoenberg and a new symphonic suite by Jonathan Nott based on Debussy's opera, released at the end of 2021, has been widely praised and acclaimed by international critics; it recently received the Preis der deutschen Schallplattenkritik and a "choc" from Classica magazine.

A third recording with Francesco Piemontesi featuring works by Ravel, Messaien and Schoenberg was released on 1st July 2022.

Gustav Mahler Symphony No 8, TUDOR 7102
«This reading of the Eighth makes a perfect climax to its Mahler cycle under its Solihull-born conductor, who is surely one of the most underestimated musicians on the planet. The opening movement, that unquestioned affirmation of faith in redemption, is frantically ecstatic and unstoppable in its impetus, while the second (and last) movement’s setting of the final scene of Goethe’s Faust is beautifully paced.»  Stephen Pettitt, The Sunday Times, 20.10.2013 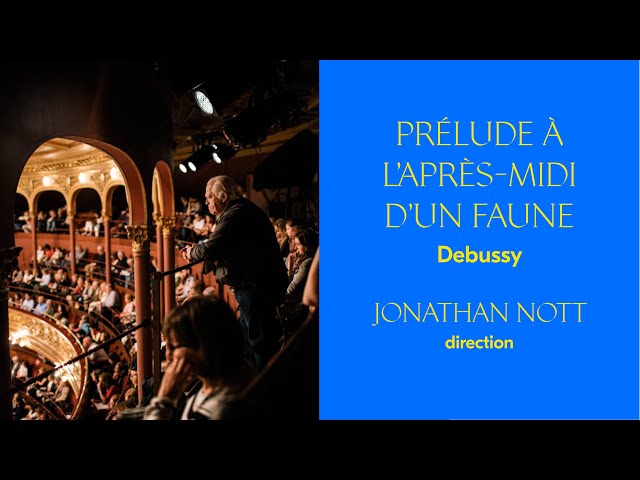